Dating at any age is difficult for sure. Online dating is a whole new beast.  I'm finding interesting complications and unexpected twists. Of course I'm still not recovered 100% and at times, when I'm upset, I'm not sure my thinking is clear so I just freeze. Look at this post as a confused old man processing and trying to figure out my own shit. Probably what I have to say here is 50/50 valid and the rest my own bull shit I haven't figured out yet.  I'm not trying to bullshit. That's for sure. But you know sometimes when we're bullshitting ourselves we don't know it because...well...we're bullshitting ourselves. I guess I'm writing this perhaps to help myself make sense of some of this nonsense.

Everyone enters into the universe of online dating with their own personal view of the world. Each with their own long and painful history of hurt, and the resulting fears of being hurt again. At my age there's a very, very long history of hurts and resulting fears. A boat load.  I call them "my buttons" and "her buttons". When one of these buttons gets hit..we have the BAM PUNCH IN THE GUT "oh shit" moment. It's the first warning sign....lights flashing.....tension....FEAR!!!

I have a couple of major deal breaker buttons. I know I have them. I know why I have them. I know where they came from. And I know they're deal breakers. So much so that I (most likely) will no longer put significant effort to negotiate sustaining the relationship. I simply lose respect for the woman if she pushes one of these buttons.  I've learned these buttons being pushed are most likely early warning signals from God...."wrong woman dumbass".

On the other hand, perhaps that perception is PTSD thinking.... too guarded.... too cautious. Who knows? I sure as hell don't know for certain...ever.

I do know this, if I'm trying to have a relationship with a woman then I'm "all in" UNTIL one of my deal breaker circuit breakers gets flipped. When one of these buttons gets hit and trips my circuit breaker I'm INSTANTLY on high alert "fight or flight"... This is where I am today from getting my feelings hurt two days ago. Don't worry about me though because by the time you read this I've probably gotten myself balanced, positive, and living in the moment again. I'm not afraid of what I'm going through at this moment (though painful) nor am I afraid of never finding "the one".  Simply writing this blog entry is helping me process and feel better. For example, I've already once again realized the woman I got infatuated with was not "the perfect woman for me" who I thought she was. She was POTENTIALLY the perfect woman for me. Then suddenly within an afternoon she pushed EVERY BUTTON, not just one. Seriously? Yeah, well I'm certain she held no malicious intent... at least I don't think so. Just different values I suppose. Nevertheless, let me get past this, wah, wah, grieving for a woman that only existed in my imagination so far...... "the perfect woman for me". Because there's frankly no damn sense in wasting much energy grieving the loss of the woman I haven't even met yet...duh.  On to the buttons.

Button one is the fastest way to end a relationship with me.  I must feel I am important. I want to always feel like being with me is the most important thing in the world to her. I must see effort (actions) to bend over backwards to be with me. I'm not stupid. I know you have kids and grandkids and other obligations and duties. This button triggers an issue from my childhood that's not going away. I'm learning how to adapt the best I can.  So, if I don't feel important it's never going to happen. This category can get very complex, or not, depending on your point of view.

I believe the first meeting should be at somewhere like Starbucks.  A couple of times women insisted on scheduling an initial meeting for over a week ahead of time.  Then an hour before the meeting I receive a text that she was asked to babysit her grand kids so her daughter could go on a date. Seriously? Personally, I get excited and build up hope and anticipation of meeting a potential partner. It's special and significant to me.  I am hurt if she cancels at the last minute when there's no emergency. She's communicated (actions speak louder than words) her self centeredness (as described in twelve step programs).  I will not be a priority, or even have my feelings considered before she follows her impulses or desires. So I now only schedule coffee meetings for "today or tomorrow".  I'm no longer willing to block out time on my calendar two weeks in advance until after I meet the woman.

Another variation of this is being "unavailable" to me. It's being unwilling to shift priorities of her time to be with me.  If I am in a committed relationship then I expect to not spend very many of my weekends isolated and alone.  In my mind this is traditional "couple time".  I once again, understand things come up. In that case there should be negotiation and compromise.

Next button, is basic courtesy. Give some thought to your words. For example, you can say, "do you always wear that hat?" which I find to be a degrading put down. Or you could say, "I like you better without the hat, would you mind not wearing it?" Now I have a chance to please you and I feel good instead of feeling degraded. Which way would you feel better? 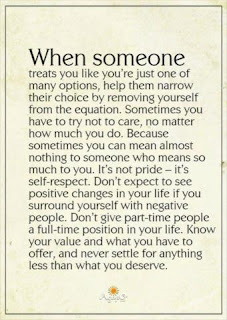